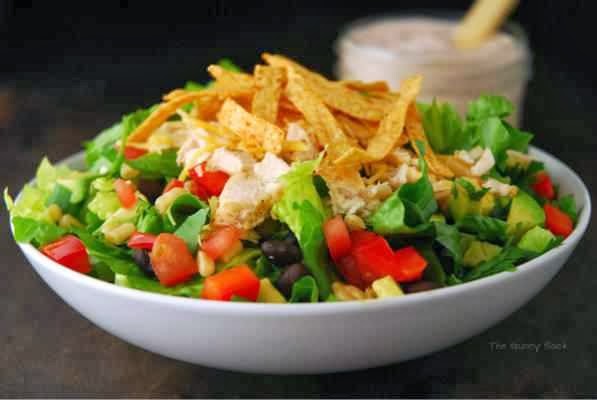 I got this Chicken Fajitas recipe from Taste of Home magazine a long, long time ago.  I started making it into a salad when a local Mexican restaurant had a Warm Chicken Fajitas Salad on their menu.  It is such a fabulous way to eat fajitas.  So yummy - I crave it like crazy.

In a large mixing bowl combine the marinade ingredients; mix well.  Set half aside to be used as a dressing for the salad.  Put the chicken in a bowl, and the veggies in a second bowl.  Pour some of the marinade over each, and stir.  Cover and marinate for 30 minutes at room temperature, or in the refrigerator for 2-24 hours.

Add 1-2 Tbs. Oil to the skillet and cook/stir chicken (half at a time) over high heat, about 3 minutes or until no longer pink.

Return all veggies and chicken to the skillet; heat through.

In a large bowl, mix the lettuce, avocados, tomatoes, and green chilies.  Top the salad with the cooked chicken and peppers and toss.  Drizzle some of the marinade over the salad, but taste test as the marinade can be salty.  Top with shredded cheese (I go slight), corn chips, and 2 Tbs. salsa.  Give a quick toss before serving family style.  You can serve buffet style, but the salad tastes better when the different flavors have a chance to meld.

If you just want the fajitas, stack 16 flour tortillas in foil and heat in a 350* oven for 10 minutes while you are cooking the veggies and chicken.


I hope you enjoy this recipe as much as I do.
It is really delish!