My sweet husband, Edward, loves to do genealogy research as a hobby.  In his quest he has uncovered that he is descended from Rollo the Pirate, William the Conqueror, Rebecca Nurse, Eleanor of Aquitaine, and many other kings and queens of England.  He is even a 3rd cousin once removed to Brad Pitt!  While it is fun to know of these connections, I can't say any of them has raised our standing in life one bit. Brad and Angelina never drop by with the kids, and I don't know what happened to our invitation to the Royal Wedding! 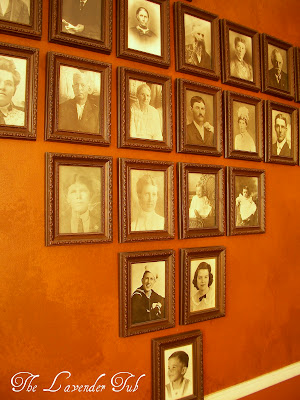 Edward has even started gathering information on my ancestry.  There is a rumor of Swedish royalty in my family tree, but the rumor goes on to say that the Royal Princess eloped with a sailor and brought shame upon the family. Not as impressive as Edward's, but certainly a girl after my own heart!  Love before prestige and $.
Anyhow, many years ago as Edward was uncovering facts about his family, he also found some very old photographs and charcoal drawings.  Completely on his own, he had copies made of the old photos and created a fascinating picture wall with them. 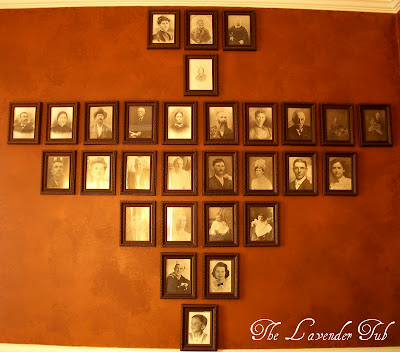 Regardless of what decorating I do, this is the wall in our house that gets the most attention.
And it should!
It is arranged in generation order with my sweet little Edward at the bottom.  Of course it is not complete, but it is still pretty impressive considering the grandfather at the top middle was born in 1790.  It's truly a glimpse of the generations of our country almost from its beginning. 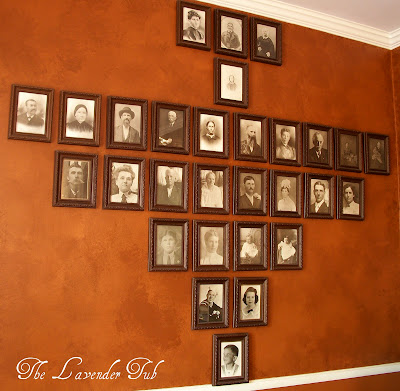 What fun it has been over the years to look in the eyes and smiles expressions of the grandparents and see hints of them in my children. 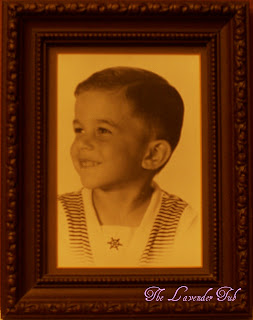 This is My Edward at 4 years old.
So precious!
Thanks for stopping by,
Ellie
Posted by Ellie at 9:01 PM