Last summer I had my boys working on some painting projects around the house.  My youngest was scraping the loose paint from the outer french doors that open from our dining room, when he yelled,
"Mom, is the scraper supposed to go through the door?"
Poor kid.  As he was scraping the peeling paint, wood from the door was coming off too.
"No, sweetie, these doors are rotten and you just got out of a painting project!"
So my husband, Edward, did what any sane person would do and removed the doors, tossing them on our haul off pile.

But you know me!

I took one look at the doors on that pile, and the creative side of my brain went into overload.  These doors were original to our house and they were still so beautiful, even if they had some rot.  Of course, I did what all of us insane people do.  I rescued the doors from the pile and started composing with them.
It didn't take long for me to realize these doors were the solution to a problem I've had since we moved in.  You see, my garden room was once the porte-co'chere to this house.  A porte-co'chere is a french term mean "carriage porch".  My garden room used to have a half circle drive running through it where you could park and enter the house through a side door.  Long before we moved in, they enclosed the space to be a kids' play room.
It is a great room with a lot of floor space, but it is a bear to decorate.  The eastern wall has an enormous bay window and a fireplace.  The northern wall has a door to the garage. The western wall has one door to the entry and on the opposite end a door to the kitchen.  And finally, the southern wall just has a nice set of windows.  It is also about 11 ft wide by 25 ft long.  A beautiful space with the bay window, but just crazy to place furniture in.  What seems to work the best is to split the room up and create two spaces.  One focused on the bay window, and the other on the fireplace. Yet up until now, everything I had tried blocked too much light from the windows and left the fireplace side unpleasingly dark.
Enter the rotten french doors!
Once I explained to Edward my thoughts, he surprisingly jumped right in and started working on the doors.  After removing the rot, he thought they were going to require too much work and shouldn't be used.  I thought they were perfect and told him not to try to fill in those areas.  Afterall, I'm all about character! 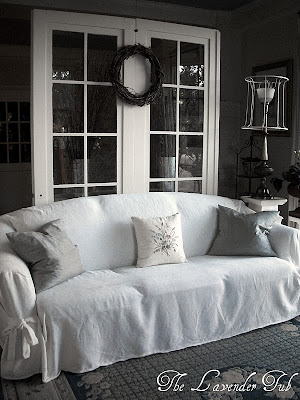 Since they were going to be free standing with a sofa placed against them, we needed a way to secure them.  If I had little kids in the house, I would opt for something a little safer than this, but this method has worked fine for over a year.  First, we turned both doors facing out and hooked them together with their hinges.
Next, we screwed L brackets to a board and then attached it perpendicular to the doors.  We hung it at the height of two columns we already had.  We then secured the board to the top of the columns, creating a narrow table ledge on the backside of the doors.  You would have to slam the front side of the doors fairly hard to knock the screen over; a risk with any screen.
The french doors have proven to be a perfect solution.  They look like they were made for the garden room, and they allow lots of light to filter through.  There is even the bonus of an extra little surface to decorate.  The best part - I am so thrilled we did not have to haul them off.
I'm a crazy lady, I know, but life is so much more fun this way!
Thanks for stopping by,
Ellie
Posted by Ellie at 2:54 PM