Years ago when Edward and I had only been married a year or two, Edward accidentally broke one of my favorite vases. This was not a special vase for sentimental reasons, it was just unique and very pretty.  It was tall and slender like a cylinder, but then bulb shaped on the bottom.  While it was just clear glass, it was etched with butterflies and flowers around the bulb then extending up the sides.
On Thanksgiving night of that year, having just stood and washed all the dishes, I decided to leave the pitcher on the counter and put it away in the morning.  I knew I would be the first one up, so no problem.  Well.....then one of those moments took place where you know what's going to happen, but you can’t get the words out fast enough to stop it in time.  As Edward walked through the kitchen in the dark saying, "I'm going to check the back door,".......I braced myself for the crash.  Yep, that's exactly what happened.  Needless to say, I was very sad.......and he felt terrible!  He knew I was always so careful with that vase, and he hated that he broke it.
Now fast forward about two weeks.  Edward and I had agreed to spend only about $40 on each other for Christmas since money had been very tight.  With so little to spend, I hoped Edward would go for something sentimental and thoughtful, and not just a cheap kitchen appliance or ugly sweater.  Remember what sweaters looked like in the early nineties?  You see my point.
Anyway, one day Edward came in beaming from ear to ear with a present under his arm.  A beautiful, little present wrapped in decorative brown paper and adorned with a perfectly tied green and red fabric ribbon, and tiny wooden mustard spoon.  He was sooo excited and went on and on about how much I was going to love what was inside the box. I was pretty sure I loved it already.
That year we traveled over several states to spend Christmas with my parents.  As we passed out the presents, Edward held my gift back and made a point to my parents that he wanted me to open it last.  "Oh my goodness, this is going to be awesome.  What could he have done with $40?"
With trembling fingers, I carefully untied the perfect green and red ribbon, admiring the little mustard spoon as I went. Not wanting to steal any of the my husband's joy, I painstakingly removed the brown paper from the gift.  Then as Edward sat with the camera focused on me and everyone in the room dying to see what was in the box, I lifted the lid....... 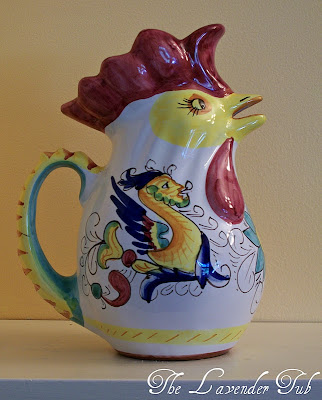 Oh, the camera did not hide my surprise!
As I took the chicken out of the box, I turned it this way and that, overwhelmed by it's.......everything!
I thought to myself, "I wouldn't give 25 cents for this at a garage sale, and this is what Edward has been going on about?"  Then I thought, "I get it, there is something inside.......like tickets to a show.......or jewelry.......or just anything else! 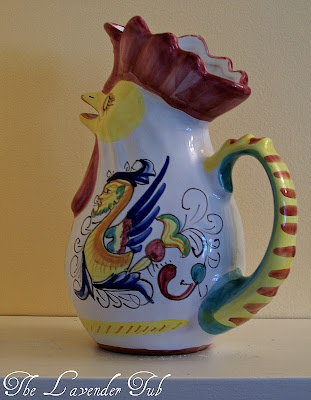 Nope!  This was my present.  A chicken pitcher with dragons and a big turquoise flower painted on it’s belly.  A chicken pitcher that you poured water in it's comb and out it's beak.  Later in the kitchen, my mom grabbed me and said, "Is that what you wanted for Christmas?!!!"  I know, Mom.  My thoughts exactly. 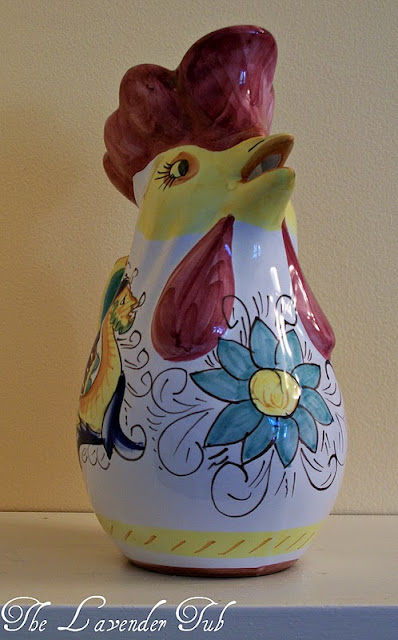 Sadly, I allowed that stupid chicken to ruin my Christmas. Rather than look at my sweet husband's gesture in trying to replace my pitcher, I thought ugly things instead, like
"How could you look at a hideous chicken and think of me?"
"When we have no money, this is my special husband gift?"
"You think this should replace my beautiful etched glass pitcher?"
"Should my Christmas gift be a replacement for something you broke?"
Yes, Lavendears, my heart went to a  very ugly place.  And then my mouth followed.  It still hurts me to think of how I wounded Edward.  What else could the man do but send the pitcher back?  And so he did.
But there is a happy ending to this story.
I asked Edward to forgive me for my shallowness and told him how sorry I was that he had felt the need to send the pitcher back.  In truth, after some time, I was very sad that it was gone.  As I thought about my husband and his goodness, I knew that that chicken was an act of love whether I chose to interpret it that way or not.
Skip ahead now - about 7 years.  Life was crazy busy with two preschool boys, a young teen, and Edward traveling frequently with his job.  One day Edward walked in from a business trip to New York with a sheepish little grin on his face, and a pretty William Sonoma sack in his hand......
"I got you a little something."
"Really?  You had time to shop for me?"
"Yes, and I think you’ll like it."
Very excited at the prospect of him bringing me any kind of gift from his travels,  I squeeled like a child as I opened the package.......
and then I saw this

and I was in love!
This chicken pitcher will forever be in my kitchen for it is a reminder of the love that Edward and I continue to grow for each other.  It is not an etched glass pitcher that you have to handle with kid gloves, but a vibrant, colorful, sometimes quirky, everyday love that is real.  I treasure it, because I treasure the man who was forgiving, loving, and brave enough to give me this gift - twice!
Thanks for stopping by.
Ellie 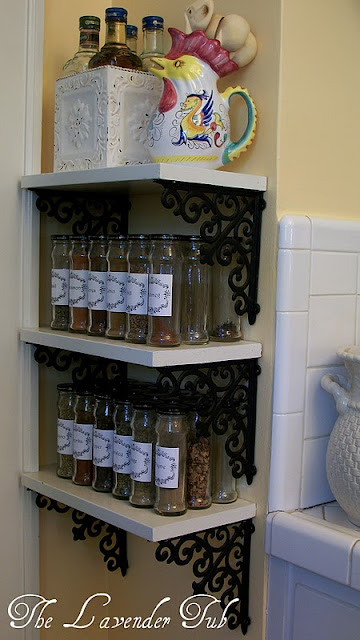 On a funny note, my spice rack is my all-time most popular post.  How wonderful that my chicken could be part of that.
Posted by Ellie at 11:05 AM