My Edward and I have differing views on what to do with old shutters.  To me, they add so much texture and homeyness to whatever room they are in.  To Edward, they are objects of utility. 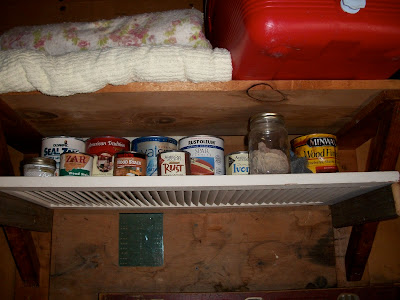 A few years ago, we took some adorable little shutters off a couple of windows upstairs.  As I was imagining what to do with them, I realized that Edward had thrown them in the trash!  In the trash!!!  This is actually a very common occurrence at our house.  I keep everything; Edward throws it all away.
With hands on hips, my head shaking and lots of muttering under my breath that this man should surely know me by now Shrugging it off because everyone makes mistakes, I promptly removed the shutters from the trash and hid them deep in my stash of goodies on my side of the garage.  I was so excited to have rescued the little darlings.
A few weeks later, an idea finally came to me of what to remake the little shutters into.  Excitedly, I went to retrieve them from the garage, but couldn't find them anywhere.  I asked, "Edward, have you seen those little shutters?", to which he replied, "Yes, I threw them in the trash."
"I know", said I, "but I rescued them and hid them in the garage."
You know where this story is going, don't you?  Yep, Edward came across them again and thought he'd missed setting them out in the trash.  Sigh.......the little shutters are gone.
Thankfully, I still have some shutters to work with.  They were exactly what I needed when creating this fireplace screen. I simply attached the shutters to an old cabinet door, gave everything a fresh coat of paint, and screwed a decorative wall plaque to the top. 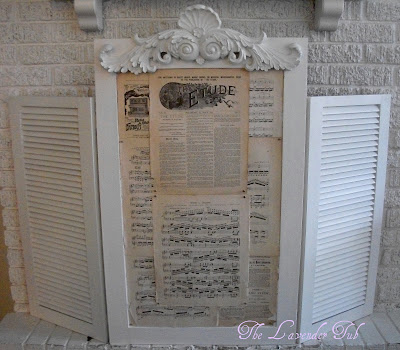 I also thought it would be great to change the design on the front of the screen now and then.  Like the magnetic memo board I made here, I painted the front of the cabinet door with five coats of magnetic paint.   This created a surface to magnet fabric or decorative papers to.  Fun! Fun! Fun! 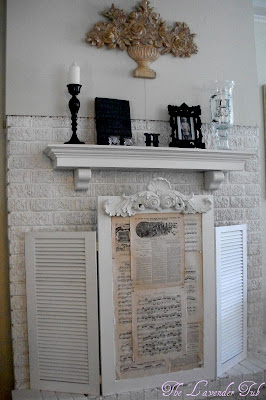 I'm really liking how the old sheet music looks.  I  can't decide, though, whether to distress it some, or not.  Edward is not crazy about that look, and too much of it doesn't look right in my classy boned old house.  Would distressing look too busy with the old sheet music, or might it blend better?  What would you do? 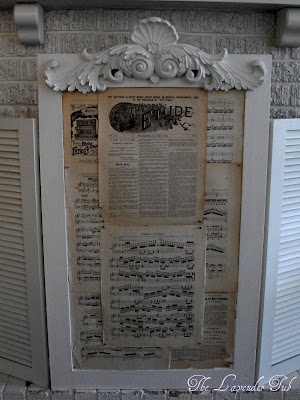 Thanks for stopping by,