Mirror, Mirror on the Wall

This is a fun tale, but if you just want to cut to the picture and see a pretty mirror, it's at the bottom of this post.
Once upon a time a woman went into the Salvation Army Thrift Store to pick up some items her son needed for camp.  Of course she told herself she couldn’t leave the store without perusing some of the pretty things, and thus made her way to where they were displayed.  She had about decided there weren’t any, when all of a sudden a light from somewhere began to shine upon the most amazing mirror.  The woman, knowing her Dave Ramsey envelope labeled For The Purchasing of Pretty Things was almost empty, wisely convinced herself that money was too tight and she did not, in fact, need another mirror.  With that she turned her back on the mirror and left the store to embrace the remaining duties of her day.
But the mirror had other ideas.  It did not like being imprisoned at the Salvation Army Thrift Store and began to beckon the woman.  It told her how it was the perfect mirror to hang in her entry.  It reminded her it was an old mirror that longed to once again hang in an old house.  And without shame it pleaded with her that it was only $14.99!
Well, what was the woman to do?  The mirror was in need of a home....yes, her home!  As you might guess, the woman could not close her mind to the appeals made by the mirror and headed back to the SATS, all the while reasoning that she could just skip lunch all week in order to ease the pain that would be inflicted upon her by the evil Dave Ramsey envelope.
Now can you imagine the horror the woman felt when she walked into the SATS just in time to see a mother and grown daughter pick up the mirror and place it in their cart.
“But I don’t like that mirror”, said the daughter.
"Well, it’s only $14.99", argued the mother.
"Yes, but I really like this $125.00 mirror over here", said the daughter.
"Oh, it’s too big and heavy", said the mother, "and I don’t wish to spend that much...."
And so went the argument of the mother and daughter as they shopped through the store until they headed for the check out.
Now the woman was beside herself.  Should she leave?  Should she wait and hope the daughter ditched the mirror, after all they had decided to purchase the $125.00 mirror?  Surprising as it is to the woman to this very day, she did neither.  Instead, the woman grabbed her every ounce of courage, went up to the mother and daughter and very meekly said, “If there’s a chance you might not get that mirror, I would love to purchase it."  Oh, no she didn’t!!!  Girl, oh yes she did!!!   Then what happened?
Well, the mother of the duo swung herself around, looked the woman in the eye and said, “Do you like this mirror? because I can’t seem to talk her into it.  If you like it, I think you should have it!”, and handed the mirror to the woman.  Are you kidding me?   The woman, still astonished by her good fortune, gushed all over the duo, paid for the mirror and quickly made haste for her car before they had time to change their minds.
Moral of the Story:  If you don’t A-S-K, you don’t G-E-T!
(a new way of thinking taught to the woman by her successful marketing rep. daughter)
Now, would you like to see the mirror?
I thought so. 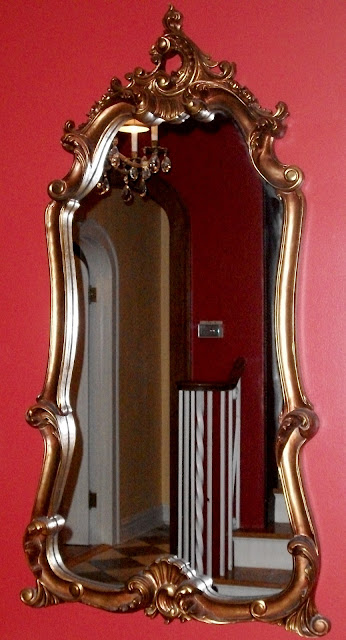 To the two ladies who so graciously gave up the mirror to this silly woman, a big Lavender Tub "Thank You"!
And to the readers of my tale, thank you for stopping by,
Ellie

linking to
Wow Us Wednesday at Savvy Southern Style
Posted by Ellie at 5:19 AM