During the holidays this past year, I decided to prove to myself that I could eat lots of high-fat foods and still gain weight.  As a matter of fact, at my work we had a couple of tables in a back room that were filled with potluck foods for 5 straight days in a row -  and I partook of the table on a daily basis.  It was called
The Trough
Now, when something is called The Trough,
shouldn't you just know better?


I mean, maybe they could call it the Manger.  It means the same thing after all, but perhaps it might make people think more about what the holiday is all about and they would avoid eating so much food.......nah, I didn't think so either.
Well anyway.......I proved myself right
and gained some weight!!!!
Fast forward to March when I'm now working to take off said weight.  I would have tried harder before now, but all 3 of my kids' birthdays fall between the first week of February and the first week of March.  What's a mom to do?
The hardest part for me is when I need a snack or a little something for dessert after dinner.  This seems like a silly recipe to post, because it is kind of a no-brainer, but it is really satisfying to me - and I thought someone else might enjoy it too. 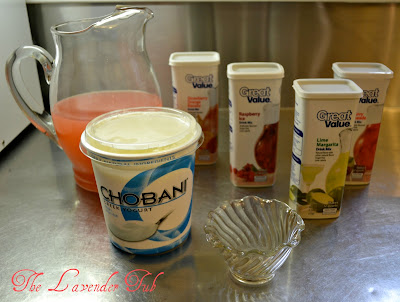 I love the custardy texture of greek yogurt, especially the plain.  I just can't seem to get passed the tart flavor. However, after playing around with a few syrups, sweeteners, etc., I  found something that tastes quite yummy.
Just mix a little Crystal Light (or in my case the generic version from WalMart) into a dish of plain greek yogurt, and stir.  I use about 1/4 tsp. per 3/4 cup of yogurt.  Less is more with this, so start with a little and add more if needed.
I know.  I told you this is probably too simple to post, but it is really tasty and satisfying for just 105 calories - and pretty healthy too.  While the drink mix does have artificial sweeteners, you are using very little - so I guess you have to weigh the risks and benefits.
The tart fruity flavors work very well with the flavor of the yogurt. 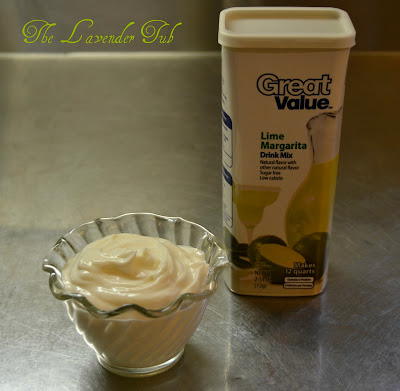 Lime Margarita is my favorite!
Please let me know if you try this and like it.  I don't want to put dumb posts up, and sometimes you need some feedback.
Thanks for stopping by,
Ellie
Posted by Ellie at 10:29 AM