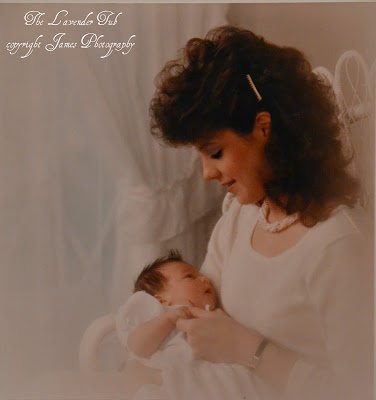 This is me as a first time mother.
Following is a song about the death of Jesus from His mother's eyes.
It is one of my very favorites.
As we move toward Easter, I hope it will touch your heart.
In Her Eyes
Mary held her baby on that night so cold.
She was a first time mother
with her newborn to behold.
She felt Him breathe His first breath
and heard His tiny cry.
In her heart He was a Savior,
but a baby in her eyes.
His lips so bright and red.
His cheeks, round and full.
As she caressed His little head,
His hands she’d sit and hold.
He grew as children do, both wise and tall.
Still she knew He was the Lord of all.
She was there to hear His laughter
and comfort His cries.
In her heart He was a Savior,
yet a child in her eyes.
She drank the miracle of wine.
She heard He’d calmed the sea.
She marveled how the dead could rise,
Yet she knew where His path would lead.
She prayed for strength
as He vowed to do God’s will.
She watched Him as He struggled
down the road, up the hill.
Mary stood there crying
as she saw Him on that tree.
Now the Son of God was dead,
where her baby used to be.
His lips with blood so red.
His cheeks, pale and drawn.
A crown of thorns upon His perfect head.
Nails pierced the hands she used to hold.
Mary held her baby on that night so cold.
He had died so she could live
as the Scriptures told.
She heard Him breathe His last breath
and heard His final cry.
In her heart He was her baby,
but now a Savior in her eyes.
Copyright by Brenda Ashley
I wish I could play this song for you -
it is so beautiful.
To hear a small snipit of it, go here and select
In Her Eyes on the media player.
Ellie
Posted by Ellie at 3:57 PM